Last Wednesday, I skipped the usual Toastmaster meetings, instead I went on a date. Not the usual dates that I have with hubby where I would first visit a salon for hairdo and dressed in black. Instead, I was in Jeans (not even in my usual working dress code.)  We drove in one car that day and later that afternoon, he picked me up from work and off we went. Not to any restaurant, in fact, I had hot dog for a meal with garlic fries and lemonade. –Unusual for a date huh? Not when we bought it from the Stadium. That's it! He took me on a date to watch his favorite team, Lakers!

Speaking of Lakers, my hubby is always a fan of Lakers for as long as I can remember. He himself is a basketball player since middle school. I remember the time when he would come by and woke my brother up for early morning practices. –We are talking about 5:00 am in the morning and his voice would echo thru our house and ultimately woke the whole family up.  That how excited he was! 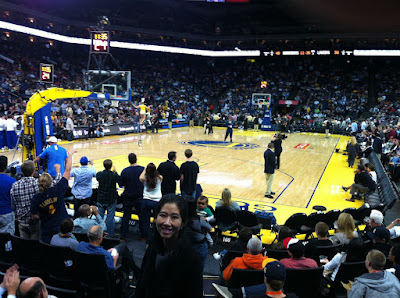 As the game started, we couldn’t take eyes off the players. The beginning was quite intense then it slowly fade away as my hubby said, both players were not equally balance. Lakers was no doubt a bit ahead of the game since the other team had four of their strong players were out for different reasons, partially because of the injury. It was a bit bummer to see Kobe Bryant was not on the game as he got injured just a week before the game. I guess we were lucked out that night but still given our seats were only 20 feet away, we could see the players pretty clearly. That was a plus.  In fact let me give you the glimpse of the games …

I have to digress here for a bit. Um ...Aside for being so left out in the sport world for years now,  for the whole night, I was thinking about “Nachos!” I saw someone eating Nachos and I wanted them but my tummy was so full. So I couldn’t eat more but my mouth and mind kept on convincing me. So, it was quite a distraction to the games., I say!

Fine. Back to the game! The sound of the fan was echoed in my ears but somehow my mind went off tangent and arrived at my college years, where my hubby took me on the first date. As you can guess by now, it was the basketball court, his favorite place. He decided to share it with me. It was definitely our fond memories. Every time, when we had some moments, we would visit the court and played one-on-one game.

Time had definitely passed and it has been years that I haven’t touched the basketball instead we are now into golf which we are not quite there yet … Someday, we would have our dates again but this time it would be in the golf course! --And I didn't buy the Nachos BTW.!

I hope you enjoy a peek into my date night with me as much as I enjoyed the nite. Now it is your turn to tell me about your unusual date(s) ...

If you enjoy my blogs, would you come 'Like' me on my FB fan page: https://www.facebook.com/AngelJourneyofLife --Thank you!

Email ThisBlogThis!Share to TwitterShare to FacebookShare to Pinterest
Labels: Relationship