Party is on … Are You Coming?


If you haven't already, we are having a BlogFest Party that will be on the whole month in October. And the most exciting part is I am going to be the host on the 27th of October. Can’t wait! 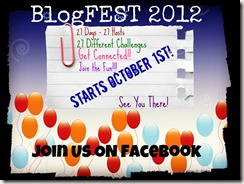 The prompt for today writing is all about Party Story. As I heard the word party … my mind wondered of and arriving at the first Birthday Party that my parents gave me. I believe I was turning either fourteen or fifteen years old.  I didn’t recall why that year just because my parents were not big on birthday parties. But they made it big for me and whole bunch of my friends were invited. My mom still have the pictures –how I wish I have them with me at this very moment.

When I was seventeen years old, I threw myself a birthday party, first party away from home,  at the house where I had rented a room along with many other high-school-er. Together, we definitely had fun. –Um … not to steer you to the wrong direction --no alcohol, just a lot of food! Then I made the first and last birthday cake in my life for myself on my nineteenth birthday. My  hubby was there to celebrate with me. First birthday with him and the party never stops ...

Perhaps that is how our family birthday tradition has started as I don’t recall any year would go by without any birthday in our households. The best birthday party was the surprise birthday party when my hubby turned thirty…


I remember we had a date that night and he was picking me up from office. Before he arrived, I placed my hands into the fridge at the office to freeze them. Soon after my hubby arrived at my office building, I told him in my faint-est voice that I was not feeling well and I touched him with my chilled hands. He was concern about my health but at the same time, I could sense the disappointment in his voice as he was so looking forward for his BD dinner with me. I pretended that I was sleeping during our driving home. As soon as he pulled his car into the drive, I was as quick as a wink and went inside the house. Before he realized it, an army of his friends came out and threw him all kind of whipped cream and pie –and that was the best birthday party he had :-)

We love to celebrate our birthdays with a chocolate ice cream cake from Baskin Robbins and dinner with our family. Being a bit special in my family :-), my hubby would take me out on fine dining and two dozen of roses will magically appear at our dining table. As for the girls, birthdays mean friends and fun activities --not to mention a lot of gifts :-)

The question is --what is your birthday party story?

Journey to the Luxor Temple


We are not quite done yet with Egypt yet and hopefully you are not bored by now :-) Today, I am taking you all with me to the Luxor Temple.

Here is a little bit of the background ... In fact, an Egyptologist will take you on a tour ...


And how pictures tell thousand words ...


Hope you enjoy this very journey and ...

Email ThisBlogThis!Share to TwitterShare to FacebookShare to Pinterest
Labels: Travel

Why They Had Failed?

Have you ever asked yourselves that question whether they are related to your own failures in life, careers or perhaps about your children’s ? If you haven’t, well, lucky you!
But for some of us, this question perhaps has been echoing in our brains or perhaps repeated many times throughout our lives. What exactly is the cause of failure? Some people blame for the lack of intelligence, some blame on the efforts. Let’s see what Carol Dweck, Ph.D has to say …

"Focus on effort --not on intelligence or ability -- is key to success in school and in life." --Carol S. Dweck

Through her research, she has discovered that people tend to thrive more even when they have hit rock bottom if they believe the very reason they are failing is due to lack of efforts and the way their mind-sets are. For those who have failed and believed due to their intelligence have developed lack of confidence thinking they have tried hard enough and they could only do so much since they have hit their intelligence limit. These people tend to stop trying and view intelligence as fixed trait. They also believe that working hard means they are not smart enough. With that mind-set, people tend to shy away from more challenging works simply worrying how others may perceive them as not smart.

On the other hands, for those who believe intelligence is malleable and can be developed through learning and hard work, tend to thrive more –they believe that they can expand their intellectual skills. Dweck believes that people with a growth mind-set feel that learning is more important than getting good grades or simply hit the goals alone.

Exactly how are we going to grow our mind-sets and our next generations? She claimed definitely not praising on how smart our children are but instead emphasizing on their efforts. She also mentioned that telling stories about achievements that result from hard work definitely help. Speaking of which, My Tiny Spider and Knowledge Tree are definitely a few examples of what Dr. Dweck has in her mind.

“Carol S. Dweck, Ph.D., is one of the world’s leading researchers in the field of motivation and is the Lewis and Virginia Eaton Professor of Psychology at Stanford University. Her research has focused on why people succeed and how to foster success. She has held professorships at Columbia and Harvard Universities, has lectured all over the world, and has been elected to the American Academy of Arts and Sciences. Her scholarly book Self-Theories: Their Role in Motivation, Personality, and Development was named Book of the Year by the World Education Federation. Her work has been featured in such publications as The New Yorker, Time, The New York Times, The Washington Post, and The Boston Globe, and she has appeared on Today and 20/20.” -- http://mindsetonline.com/abouttheauthor/index.html

Email ThisBlogThis!Share to TwitterShare to FacebookShare to Pinterest
Labels: Life skills, Parenting and such

Would You Ever Go Through Hazing to be Part of a Group?

Would you ever go through hazing to be part of a group? That was the question that the New York Times was asking its readers lately. Reason being, even though after 44 states have passed the law to discontinue the hazing, the practice still persist … Yes, even to date!
The article zeroing into one of the most prestigious public institutions in the Northeast, Binghamton University where – “a hazing scandal that forced the university to suspend pledging and induction at all fraternities and sororities.”

Very interesting subject. I was never part of any sorority when I was in college –just because. But, I heard about the sororities, for a time, I thought it was the coolest groups but strangely never did it once occurred to my mind to join one. Perhaps I had done myself some justices. Either way, this is another mind-set that the newspaper’s current editor in chief, Daniel Weintraub, pointed out how most hazing still remains as open secret. “The view of the majority of the student body is that everyone knew all this was happening and no one cares,” he said. “People think, ‘If you want to be hazed, go join a frat; if you don’t want to be hazed, don’t join a frat.’ ” –Interesting. 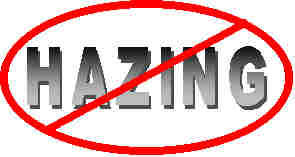 Knowing this, would we ever let our next generation to join one? Also, we, as parents, how can we prevent our children to be the executors of the hazing?

Until next stop,
Journey of LIfe
Posted by Journey of Life at 10:48 PM 18 comments: Links to this post

Bargaining at the Nile River ...

Nile River is believed to be originated from Burundi, south of the equator which eventually flow through Egypt and finally dripping into the Mediterranean sea. In fact Nile River Nile is formed from the two different Niles, White Nile, which originates from the Lake Victoria, South Africa and the Blue Nile  which originates at Lake Tana in Ethiopia. These two rivers met in Sudan and then travel a long journey to reach its destination. Perhaps that is the reason why Nile River is also known as the longest river in the world.

As you known, Egypt is a desert area which rain is almost non-existence, that is why Nile River is fairly crucial to the ancient Egyptians and even present time ...
Today, I am taking to you to take a sneak peek at how the Egyptian merchants are doing the biz with the tourists which reside on the cruise ship along the Nile River.

Isn't it interesting? None of the tourists, at my ship, were actually bought anything from them --for whatever reason might be ... but it was definitely once a lifetime experience for us, for me, to witness how the Nile River not only providing food, transportation, and source of water for the Egyptians but also way of doing biz.

I hope you guys are enjoying the Bargaining at the Nile River ...

Until next stop,
Journey of Life

Posted by Journey of Life at 8:05 AM 8 comments: Links to this post